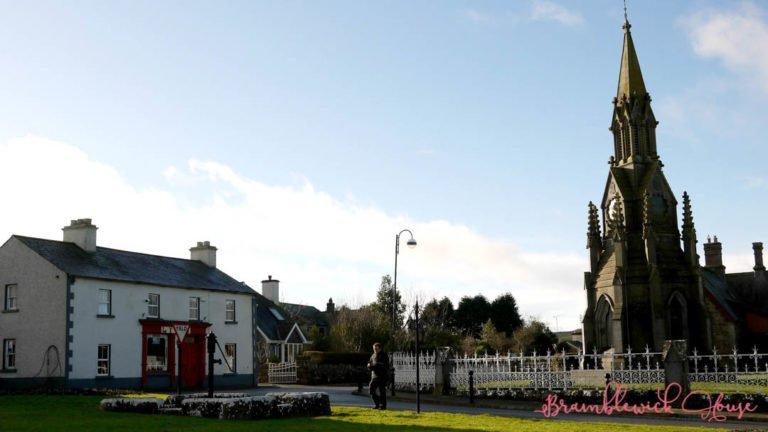 A place of stories

Definition, Heritage:  “denoting or relating to things of special architectural, historical, or natural value that are preserved for the nation.”

The village of Ardagh plays a central role in the comedic play, “She stoops to conquer” written by that native of the town of Ballymahon in Longford, the writer Oliver Goldsmith. The play allegedly immortalises a comedic incident in which Goldsmith, needing accommodation for the night, was directed to Ardagh house by a local character of certain malicious humour. This turned out to be the house of the Fetherston family. Upon arrival, he believed it to be an inn and the daughters of the house happily played along with this misapprehension, pretending to be servant girls whom the unfortunate Goldsmith then attempted to seduce. The resulting play is a comedy through which Goldsmith explores the themes of sexual morality and its double standards in the 18th century but it continues to be performed today.

This story behind the play seems a little too far-fetched. The Fetherston family house was a grand affair so it is hard to see how it could be mistaken for an inn.  Perhaps that is how it was meant to be, Goldsmith using intertextuality to join together aspects from one story that readers are already familiar with to make a new point that they can easily understand – creating stories through referencing other stories. This idea is something to bear in mind when visiting Ardagh.

Ardagh House still stands in its grounds and the village is a fine example of the “model estate village” with its stone cottages built for the tenantry as a tribute by Thomas John Fetherston to his uncle Sir George Ralph Fetherston. It is one of the few such places remaining in Ireland and as such has that feel of the traditional idyllic past with its central green, village water pump, clock tower and churches. It is a carefully constructed image that projects a feeling of order and permanence and tries to take control of the story we may tell ourselves about the lives that were lived here as we wander around. And there is definitely some storytelling going on. I mentioned the traditional idyllic past but whose tradition does it pertain to be a part of? The estate buildings were based on a Swiss model and swept away all trace of the cabins and huts that were there when the Fetherstons arrived in the early 1700s and before they started their re-modelling. We also have to ask what story Thomas Fetherton was trying to tell about his family as landlords. A new light is shed on this benevolent project when we note that the walls of the estate were mostly built as part of the relief works during the great hunger of the 1840s – those public works providing employment for the starving so that they could ‘earn’ their sustenance. We can appreciate then that there are layers of stories here to unravel.

Behind the village stands Brí Léith, now know as Ardagh mountain or Sliabh gCalraighe which means the hill of Calraighe – an ancient people who dwelt in the area millennia ago. There is a burial mound on the hill which may explain why it is the setting for the Legend of Midhir and Étain, these places traditionally being associated with the realm of the sidhe. It is an old tale, perhaps older than all of the other tales from the Irish mythical cycle and concerns events surrounding a member of the Tuatha Dé Danann called Midhir who dwelt in the hill and the princess Etain.  There are plenty of easy to find sources that summarise the story so I won’t go into detail but it could be that the tale (possibly first written down about 900 AD) contains the bones of earlier religious beliefs connected to the hill. Hints at a prehistoric cosmology do appear in other legends and this idea is explored extensively in John Waddell’s excellent book, Archaeology and Celtic myth.

The peak also has connections to St Patrick whose own life and achievements are interwoven with bright threads of myth. It was upon Brí Léith  that he met with the King of the old kingdom of Tethbae and sowed the first seeds of Christianity in the area. It was in Ardagh that the saint founded a church under his nephew who was to become St Mel.

This first church was built from wood but the cyclopean remains of a later stone built cathedral on the site can still be seen in the village. They hint at an impressive building. The new cathedral of St Mel can be found in Longford town, a building that like the original suffered destruction but has since been rescued from the fire that ravaged it and restored to new glories. St Brigid also spent her first years as a nun in Ardagh and founded a convent with her seven companions. A nearby well is named after her. Strangely, no trace of this convent has been found and Brigid is something of a controversial figure with some debate over whether or not she was actually real. She shares a lot of the attributes of the Celtic goddess of the same name and I suspect that the early church was just as adept at incorporating earlier material into their own stories as those who had shaped Ireland’s mythical landscape before them.

The legend of Midhir and Étain is further immortalised in statue form at the Ardagh heritage and creativity centre which is housed in what was once the local national school built in 1898. It’s here that we encounter the story of Ardagh laid out in more detail but also where more personal aspects of its past are on display. The current custodians of the centre, Ann and Annette, told us that during its setting up the locals of the village brought items from their own homes to help fill it. The final story is left to Annette who has her own deep connection to the village and heritage centre. It is of course the place where she now works, creating new stories for others through art but it is also the place where she was schooled and where her own great-grandfather was teaching during the rising of 1916 – perhaps a story that brings Ardagh to life more than the others.