A place for nature 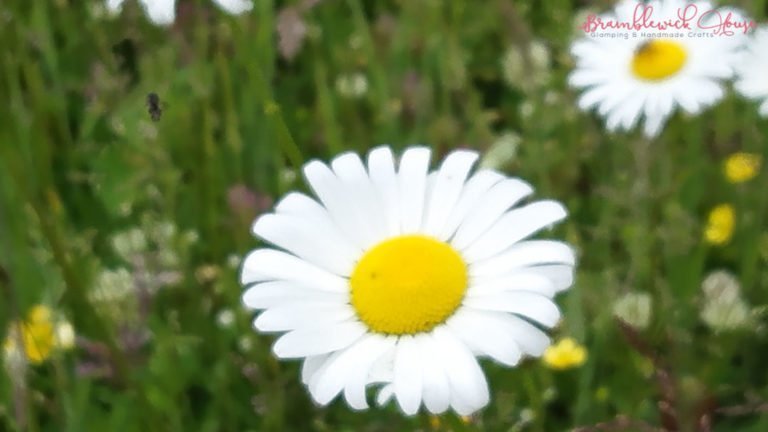 Bramblewick House sits in grounds of approximately two acres. Some of that is garden and the rest is field and trying to keep on top of all of that is a challenge. At times, it has almost seemed like an obsession which I think was based on the fear of losing control of what we had managed to claw back from the original wildness of the place. There is a recognisable human urge to bring order to things and to control our environment that drives us on especially when the weeds grow as fast as they do here in the wet weather. Not only that, it was hard work and at times expensive and nobody likes to see their hard work and money wasted. It might also partly have been to do with not knowing what we really wanted the place to be so the logical thing to do was to keep everything cut down until a decision was made. Ultimately, nature made that choice for us and we’ve been happy to go with it.

Our first act was to build the raised beds for growing vegetables – too many episodes of The Good Life I’m afraid – which did indeed prove productive in both food and then weeds as paid employment took my time away from them. 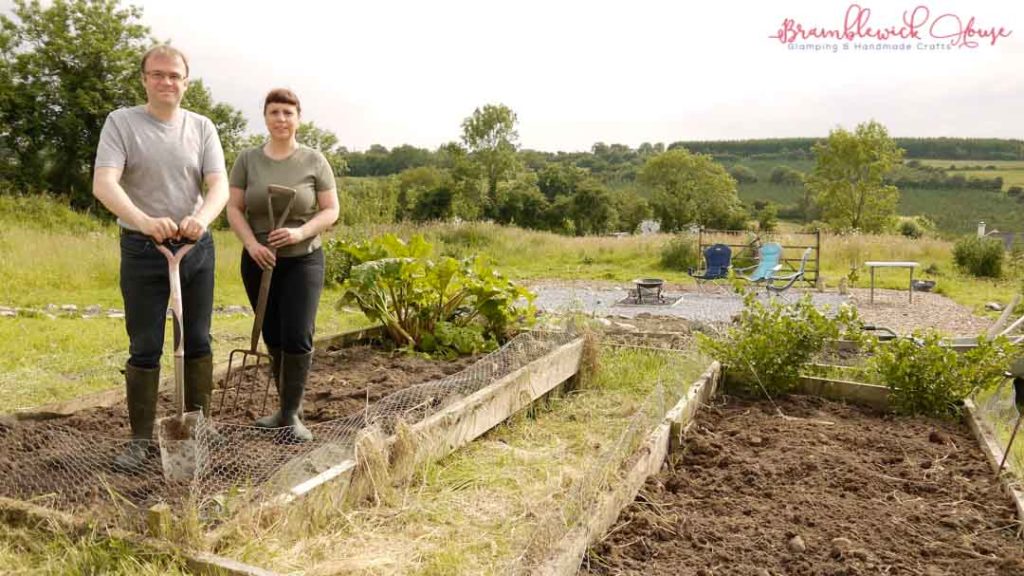 The next idea was to turn the field into a wild flower meadow so we bought large bags of seed suitable for the conditions in different areas. This was duly sowed and the results eagerly waited. This was our first disappointment. Maybe I sowed them at the wrong time, maybe the seeds were just no good or maybe I was just impatient but nothing grew that year.

We planted willow cuttings in the wet areas of the field and they grew even though May’s dry weather killed off some of them. Through the summer we cut down the grass that threatened to swamp the rest of them and then finally the huts arrived in August and in October the groundworks began. Big JCBs are no respecters of fragile plant life and so many of our willows went down under the caterpillar tracks of our builder. These have since been replaced by more cuttings and are growing well. If all goes to plan, I should be able to pollard them some time in the future and use them for firewood. 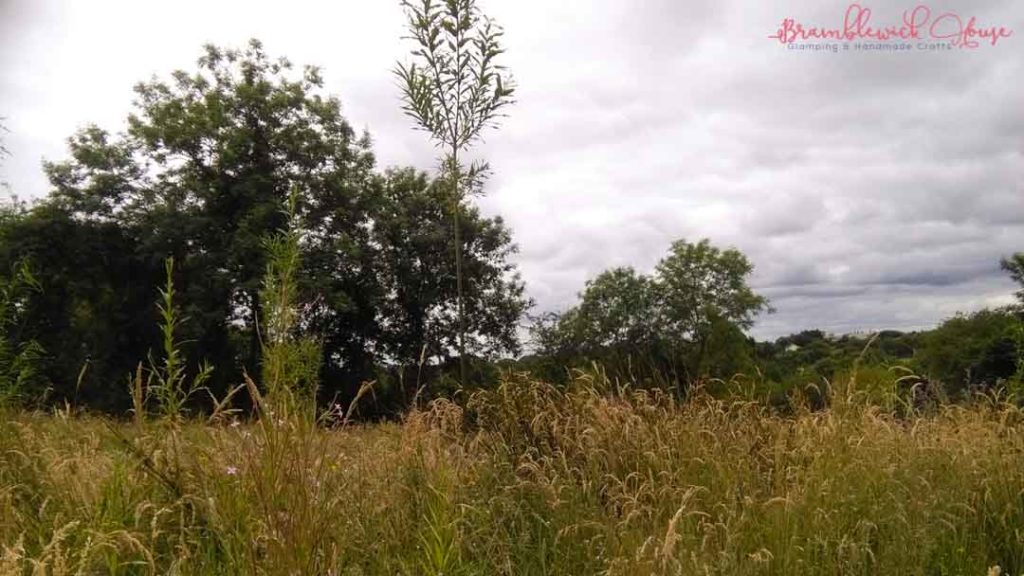 At the same time, nettles sprang up and grew in proliferation and would have overtaken many of the spaces I wanted to keep clear but for the massive spread of the pumpkin vines I cultivated that smothered them instead and suppressed them for the summer and autumn. I never knew they could grow so big. This was the area that eventually became our fire pit in the Spring when laid down weed suppressing fabric and covered it with four tonnes of river pebbles.  At first I thought to spray the young nettles that grew wherever they could (this I was told was the best method) but when I looked down they were alive with the scuttling of spiders and innumerable insects. I had to ask myself what harm I could be doing so the spraying stopped and the strimming and raking started. 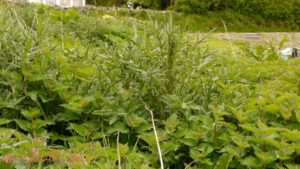 All of the ground management since then has been done this way – mowing, strimming and raking – and the results have been pleasing. At first, I thought the wild flowers that have sprung up this year had to do with the seeds we sowed but then they started to grow where we had not sown. Keeping the grass down had obviously given them some space.

The field looks more like a meadow now and round the verges fox gloves have grown in proliferation as well as a flower known as sweet rocket and mother of the evening (amongst other names) that many older people here have mentioned as something that was common in their youth. The field has also grown vetch, ox-eyed daisy, pink and white clover, buttercup and cowslip and different thistles, the flowers of which are attractive to butterflies, bees and all manner of pollinators. When creating a wildflower meadow, some websites recommend killing off everything with weed killer but that’s a matter for individual consciences. Growing wildflowers will ultimately benefit wildlife but the environmental effects of using chemicals needs to be considered. For myself, I’m going to have to accept that I can’t keep all of the grounds clear and just focus on a few areas. 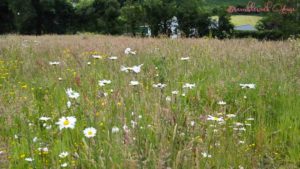 As a keeper of bees, I get excited by anything that may interest the inhabitants of my hives and this is another reason not spray poison on the land. Even if my bees look elsewhere for their food, the plants attract the insects which then attract other animals. Now more than ever before, we must be mindful of what we do to this six legged order of existence. It seems likely that if they go, we go too and there’s certainly a lot more to them than just the usual biting, stinging suspects. Once you spend any time examining them, it’s easy to appreciate the variety of colours and forms. They are indeed beautiful. 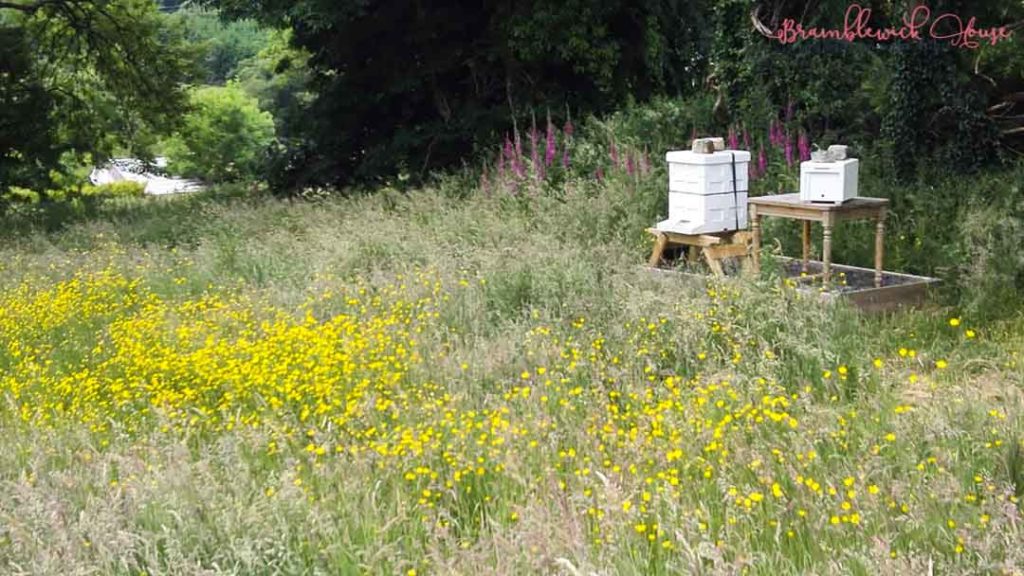 Speaking of beauty and form, I love the fact that we can film the swallows swooping across our grounds and watch and listen to the multitude of young birds being reared around us. Our stone shed is often home to several nesting broods. Rabbits feed on our lawn and I have seen stoat, mink and pine marten in the area. If I stand outside the back door in the evening, I can watch bats circle the house. I’m still surprised by the animosity people have towards this harmless creature with its astonishing sonar abilities. I would love to see more of them.

Here’s the thing – by trying not to control everything, we’ve created a space for nature to fill. Admittedly, it had already been filled it but it was not in a way that nature and ourselves could co-inhabit. It had smothered everything. We’re not called Bramblewick House for nothing. Compromises had to be made but I hope that we’re well on the way to creating a place where wildlife can thrive and people can appreciate its different forms. None of our guests have so far ever complained about waking up to the birdsong that fills our little corner of Ireland and I’m not about to wish we were surrounded by one of those sterile deserts of manicured grass that is anathema to the natural world.For anybody who wants to create their own wildflower garden, these places may be of some interest and help. 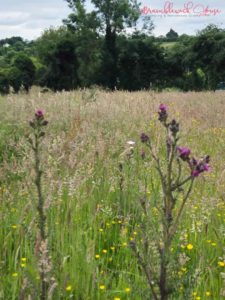