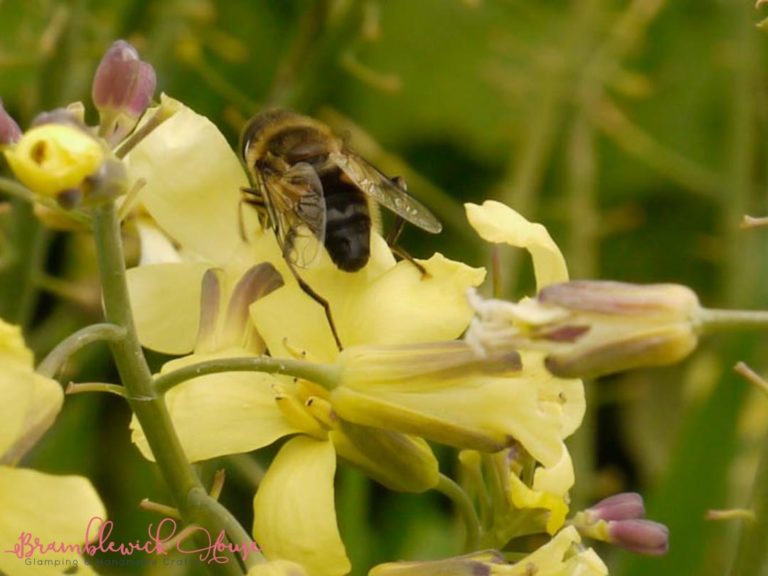 The beekeeper’s year is well and truly moving on and the bees have been working fast. So much so in fact that I nearly missed what is perhaps the most vital part of the early season – swarming time. It’s not over yet but with some excellent advice and support from the knowledgeable heads at the Longford Beekeepers Association, some good luck and some sound judgment, I should end up with two hives going strong by the end of the year instead of just the one and lots more honey.

After a winter that seemed like it was never going to end, I was pleasantly surprised to see how well the colony had come through it. I had been watching the bees come and go from the hive as the weather warmed up and had already made two inspections by myself before I decided I needed to call in some more experienced eyes. 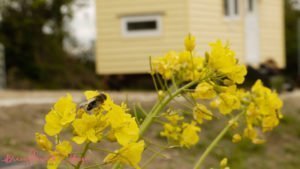 I was worried I had left things too long before opening them up and had to spend some time scraping away wax comb the bees had braced between the frames and onto the top cover of the hive. Unfortunately, suitable weather and work commitments do not always marry up to produce ideal windows of time and temperature to carry out an inspection.

If it is too cold, the developing brood of bees in their wax chambers can become chilled and die and you certainly do not open the hive when it is raining. The latter weather event is definitely a problem for Irish beekeepers. However, it was the sight of queen cells in the brood box that triggered the phone call and the request for some help. It was agreed that Sunday would be a convenient day.

Little did I realise that I was not going to be the only call they were going to make that day but at 4.30pm two members of the association duly arrived. It is a busy time of year for the experienced hands. Their dedication to the craft they pursue has to be admired but this husbandry of these fascinating insects evokes strong feelings and has given the world a wealth of folklore. 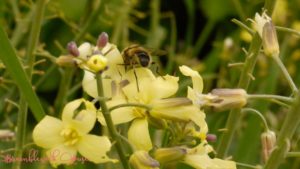 One such tradition dictates that a strong bond can be formed between beekeeper and bees so much so that a hive needs to be told if their keeper has died and has to be put into a state of mourning. Failure to do so might see the hive fail to thrive or even leave. I do not know if this is true but I do know from what I’ve been told that losing a colony of bees to disease or starvation can be a saddening experience for a keeper.

Mine had not suffered either of those and I did not want to now lose a large chunk of them with the current queen bee to swarming. I wanted her to be still inside so she could be taken out and put into a small nucleus hive with some young bees to start a new colony.   As we went through the frames in the brood box, turning them over and spotting queen cups being prepared, it was not at first clear if we had got there in time but then she appeared, easily identified through her elongated abdomen and the white spot her previous keeper had put on her back. 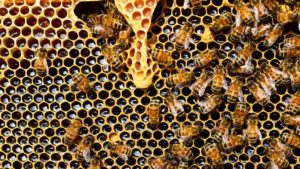 The queen is now sealed in her temporary home with a bucket-load of young bees. How do we know they are young? A couple of frames are literally shaken into a bucket. Young bees cannot yet fly so drop into it and remain there. They are then tipped into the nucleus hive with the queen, a frame of stores, a frame of brood, some frames of foundation wax and the entrance is sealed for forty-eight hours. The bees in the original hive will now be working on rearing a new queen. 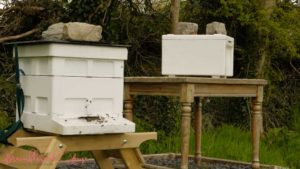 Watching my two associates, one thing became clear: I have still such a lot to learn. Their practised eyes picked out things I would never have spotted. There was a drone bee with a misshapen wing (a sign of deformed wing virus and probably also varroa mites); that frame held pollen stores and that one had eggs laid in it – get the light behind it and they are easier to see – and there was a queen cup with an egg in it. However, the final conclusion was that it is a good box of bees.

The hive now has a super (the part where the honey is stored) on it and I have been advised to add another. Last year, this new colony produced six jars of honey but this time round I am expecting more, especially if the weather continues to be as good and the new colony in the nucleus hive expands.

In my opinion pure, unblended honey is far superior to the blended type. You do not get the same consistency in taste but each batch is unique as each hive collects different quantities of whatever nectar they can forage. Stand near to the entrance of a hive and it is possible to see where the bees have been foraging by looking at the pollen baskets on their rear legs. Different species of plants produce pollen of different colours and this is visible as the bees fly in. The taste of our honey will be determined by wherever they have decided to go and gather food and will also be like nobody else’s. 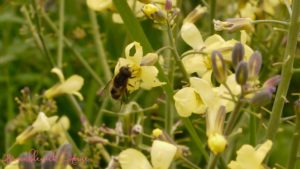 One thing is for sure: our bees have plenty to feed on. Not only has our garden provided plenty for them but the hedgerows, fields and roadsides round our wonderful part of the heartlands of Ireland are also bursting with blossoms and plant life. Spring time puts on a spectacular display and a ramble along the back roads, alive with butterflies and the song and activities of a profusion of nesting small birds, is a rewarding experience. We are looking forward to seeing just what our bees produce. This will then be on sale to our glamping site guests here at Bramblewick House as well as on our craft stall at different spots around County Longford and the Midlands of Ireland. 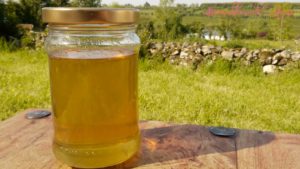