It is not yet the end of the beekeeping year but it feels like a door has been closed on one part of it at least.

The fantastic weather this summer created great conditions for honey production and my hive did not disappoint, making somewhere in the region of ten kilograms that translated into thirty-three jars for sale. Most of these sold within a few hours of going on Facebook. This number is modest in comparison to the amount that I’ve heard about being sold elsewhere but then I only had the one hive producing it this year. However, it shows that there is a strong demand for a good local product, something further proved by the response to our first lot of home-made beeswax candles. 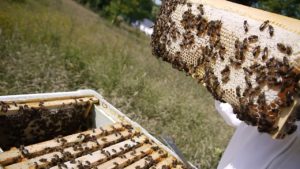 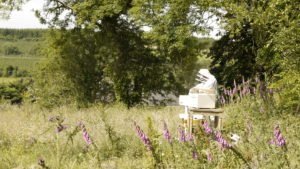 Next year I hope to enlarge my apiary and have more to sell but now seems like a good time to reflect on what I have learnt during my first full year keeping bees.

Joining the Longford Beekeeping Association was definitely a good idea. The support of this group of knowledgeable, enthusiastic and dedicated people has been invaluable. Help and advice has only been a phone call away. If I’ve needed somebody, they’ve always been willing to come out to our place and have a look, even on a Sunday. The monthly meetings and lectures have also provided a mine of information and given me the sense of being part of a wider community which reaches beyond the borders of County Longford and Ireland itself. Although there is some money to be made in keeping bees, most do it for the love and fascination of these compelling tiny creatures.

Beekeeping can be hard, demanding work especially when the bees are filling up the supers with honey. It did come as something of a surprise to feel the weight of them and trying to manoeuvre them off and on in a calm, careful way without squashing bees in the blazing sun was a challenge. Beekeeper’s back is definitely a real thing and taking the honey frames from the hive and trying to keep the bees off them was frankly exhausting although recovering from an illness at the time probably didn’t help. However, that was another part of the journey. You have to take your chances to work on the bees when they arise as a change in the weather can ruin everything. Not feeling one hundred percent up to it cannot be allowed to get in the way especially when I’ve seen the weather go through all four seasons in the course of a few hours. 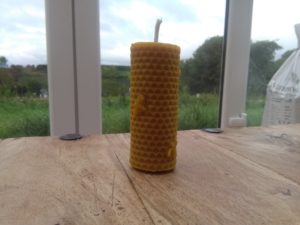 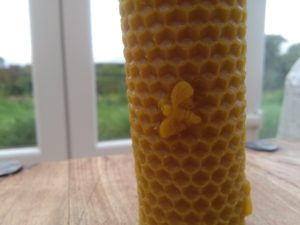 I have learnt that bees can appear to have moods, depending on environmental conditions. On hot sunny days, my bees were incredibly placid and hardly seemed to notice the interference as I pulled out frames and inspected them. In contrast, an overcast humid day provoked an entirely different reaction with bees bouncing off my suit’s hood and following me up the field to see me off. Taking the placid behaviour for granted can have very unfortunate consequences which we found out at our expense one day. However, when undisturbed, the bees show absolutely no interest in people and none of the guests in our shepherd huts have been bothered by them. 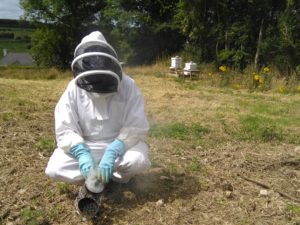 When dealing with the bees, it pays to have a well fueled smoker and a supply of extra fuel just in case. I have found that it is also wise to get the smoker going well in advance of opening the hive. It is the best way of clearing bees from the tops of frames and from round the edges of the boxes and it is infuriating to struggle with such things while the smoker slowly decides to get going or runs out of material to burn. Running up the field in bee-proof clothing to find more fuel is very warming and not conducive to a calm and collected manner. I don’t know if it makes any difference to the bees but adding incense resin to the mix makes for a more pleasant experience although it does gum up the insides of smoker. I learnt this trick from the brothers at Buckfast Abbey in the UK via the monthly journal distributed by the Irish Federation of beekeepers although I don’t remember them mentioning the effects of the resin on the equipment.

All in all, it has been rather eventful. There have been moments of crisis – one edge of the platform on which the hives sit collapsed nearly taking the main hive with it – and I lived with the constant worry about if I was doing things right or if I’d perhaps squashed the queen when I put that last frame back but the sight of those thirty-three jars of liquid sunshine and a strong, thriving colony of bees made all of that irrelevant. Quite unexpectedly, I have more honey to extract even at this late stage of the year although this may well include ivy honey which I am told has a very strong and unique taste. I have read and heard about the supposed health benefits of ivy honey but I am not allowed to make such claims myself. However, if you want to find out more here is a good place to look.

I have found that there is a real satisfaction to be found in this past-time that goes beyond the monetary value of the honey. Yes, that is a welcome extra income but as one of the Longford beekeepers said, it starts out as being about that but ends up being about the bees themselves. 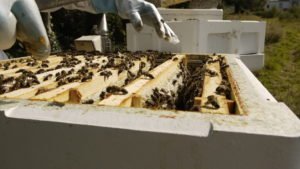